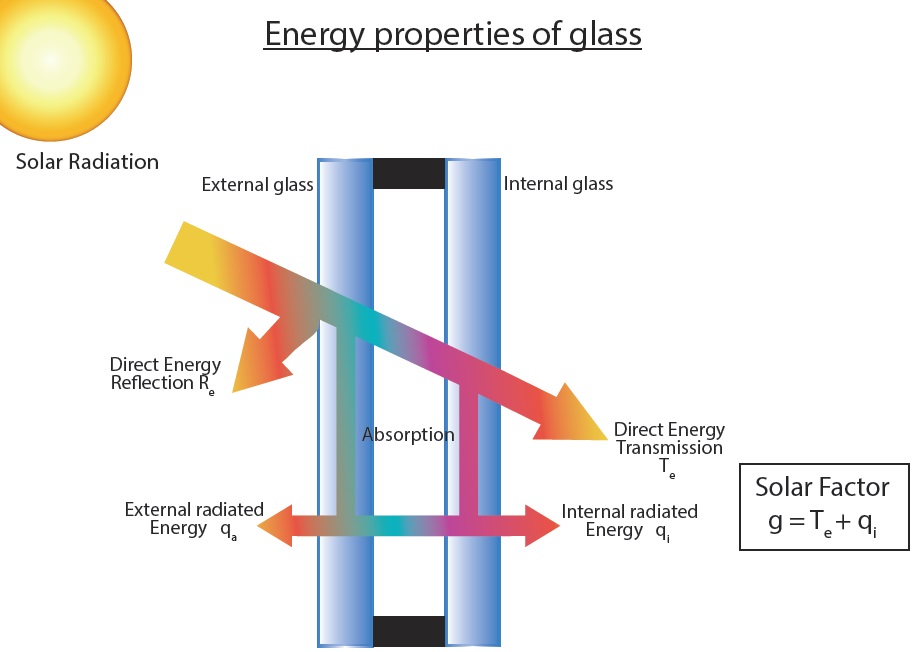 Solar gain is the increase in thermal energy of a space, object or structure as it absorbs heat energy from solar radiation.

The amount of solar gain that is experienced by a space depends on the ability of any intervening materials to reflect or transmit heat energy away or towards the space.

For example, the solar gain of a room in your house depends on your windows’ ability to absorb or reflect heat energy away from the house.

Objects that are hit by direct sunlight will absorb the short-wave infrared waves causing them to increase in temperature and then re-radiate this heat energy in the form of longer infrared wavelengths.

Glass tends to allow visible light to pass through its matter almost uninterrupted. However, once the light has been transmitted through the glass, it is turned into longer infrared radiation waves; these waves are now unable to escape back through the windows due to their larger size. Therefore, the heat is trapped inside the room causing the solar gain.

This is called the greenhouse effect.

In structures, excessive solar gain, caused by the ‘g’ factor, can be both an advantage and a disadvantage.

The greenhouse effect can lead to overheating, making the space uncomfortable. Alternatively, this heating phenomenon can be used as a cheap heating strategy in colder climates.

Generally, most windows will have a g-value that ranges between 0.2 and 0.7 while a window with solar control glazing should have a g-value of no more than 0.5.

In colder climates, solar gain from windows is used to the homeowner’s advantage. Large windows are positioned on the south-facing walls of properties to maximise solar gain.

Glazing with a high G-value is used so that as much heat energy is transmitted through the windows and into the dwelling.

In warmer climates, excessive heat transmittance is undesirable and therefore, steps are taken in order to reduce solar gain inside a building. To reduce this, and avoid excessive air-conditioning bills, solar control glass has been developed.

The solar control coating is a metal oxide coating which reduces the volume of infrared shortwave radiation that can travel through the window system and therefore reduces the solar gain of the room inside.

These coatings are especially effective as they reduce the amount of solar energy that is allowed through the glass while not greatly affecting the light transmittance of a system.

An alternative to reducing the amount of solar gain inside a room is by the use of protective blinds or louvres. These are far more cost-effective than glass coatings, however, they dramatically reduce the amount of light transmittance into a room making it much darker.

One thought on “What is the G Factor?”

No feed. Create and publish a feed to display it.